The first half of this book revolves around the evolution of transaction.

From this chapter, we delve into peer-to-peer network architecture.

The Bitcoin system will evolve towards a living organism.

Satoshi and Gilfoyle completed the transaction script mechanism according to the design. Bitcoin was now in the next stage of its evolution.

Then Satoshi started thinking about how to make complex living organism out of Bitcoin’s current capabilities.

Satoshi said, “I want to grow Bitcoin into an independent living system, self-sufficient and not relying on my daily maintenance.”

“But it absolutely makes sense after some thought. If Bitcoin wants to become a world-class general computer, it must have global trust. If the system relies on one person for maintenance, this trust won’t happen. Bitcoin must be independent and not rely on one ‘big boss.’ Then it could one day grow into a perpetual motion,” Gilfoyle added.

“Have you got any idea?” Gilfoyle asked.

“What’s the most intelligent organism in the world? The nature. We should learn from the nature and its designs, such as bee swarms, ant swarms and fish swarms, and other organic entities like the human brain,” Satoshi said.

“We use one concept to represent their abstract essence – the swarm system.”

“If we’re ambitious enough, we must challenge the limit of intelligence. That is: create a life system.”

“Therefore, the goal of Bitcoin is to become a swarm system!” Satoshi concluded.

What exactly is a swarm system?

“There are two extreme ways to structure “moreness.” At one extreme, you can construct a system as a long string of sequential operations, such as we do in a meandering factory assembly line. The internal logic of a clock as it measures off time by a complicated parade of movements is the archetype of a sequential system. Most mechanical systems follow the clock.
At the other far extreme, we find many systems ordered as a patchwork of parallel operations, very much as in the neural network of a brain or in a colony of ants. Action in these systems proceeds in a messy cascade of interdependent events. Instead of the discrete ticks of cause and effect that run a clock, a thousand clock springs try to simultaneously run a parallel system. Since there is no chain of command, the particular action of any single spring diffuses into the whole, making it easier for the sum of the whole to overwhelm the parts of the whole. What emerges from the collective is not a series of critical individual actions but a multitude of simultaneous actions whose collective pattern is far more important. This is the swarm model.”
— from “Out of Control” by Kevin Kelly

Life systems in the natural world are almost all swarm systems. But clock
systems only appear to exist in artificial forms.

An example can give us a more detailed look.

Vibrio Fischeri is a bioluminescent bacterium. It symbiotically resides in the body of Hawaiian bobtail squid (see graph below). 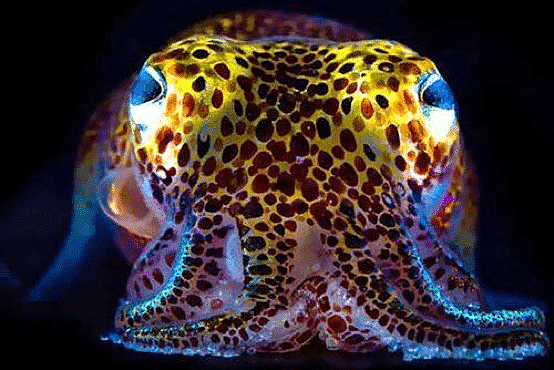 The distinctive feature of this species of bacteria is that a single bacterium doesn’t exude light. Only when a large number of the species live in high density in one area, do they simultaneously illuminate. 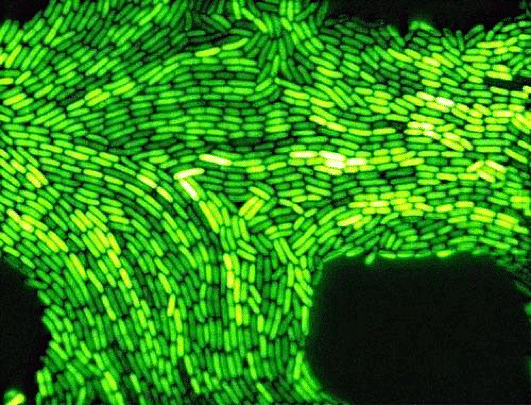 Why do they behave this way? #

How do these bacteria gain something that seems to resemble collective intelligence that they individually do not have?

If we regard one single bacterium as a function, then the function for Vibrio Fischeri is like using a very simple algorithm to achieve collective luminescence.

Specifically, every bacteria function transmits a signal to mark their presence. This signal presents itself in the form of an organic compound called AHL.

At the same time, this signal enters the body of the bacteria function as a input parameter.

The function goes like this: when there is signal input, it illuminates and produces signal to release to the external environment. 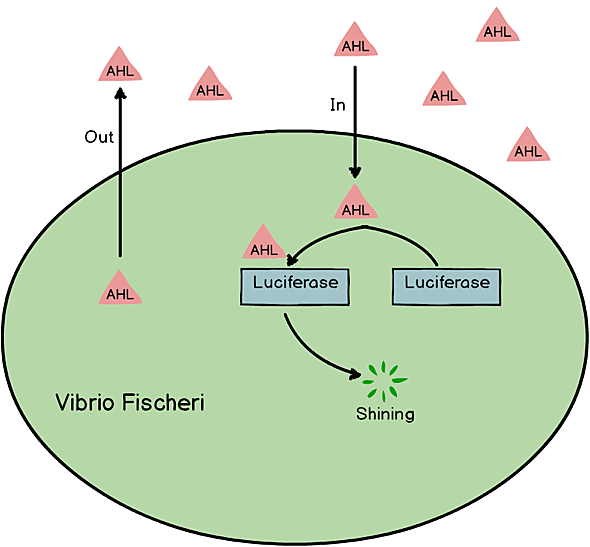 The underlying algorithm of Vibrio Fischeri

When the bacteria are in individual existence, its signal density is very low. Hence the production and release of the signal compound cancel out each other and result in zero light.

However, when they exist in group, the signal dramatically increases and enhances the signal production of other bacteria, resulting in exponential growth in the signal release and hence light.

The value of this bacteria bioluminescence is, by helping the squid capture preys through light, they indirectly obtain energy from the squid’s prey.

First, every bacterium only needs to take care of itself, as explained well by the Austrian economic principle of individual interest: everyone pursues their own interest and the world becomes better.

Second, simple rules give rise to complex behaviors. We compare the bacteria swarm to a whirlpool. In the inner circle of the whirlpool is the individual function, and in the outer circle is the functionality that causes light. We only need to spin the inner circle to cause the complex phenomena that would arise automatically.

Essence of the Swarm System #

From the above example, we can summarize several essential characteristics of swarm systems: A swarm system is like a vortex. 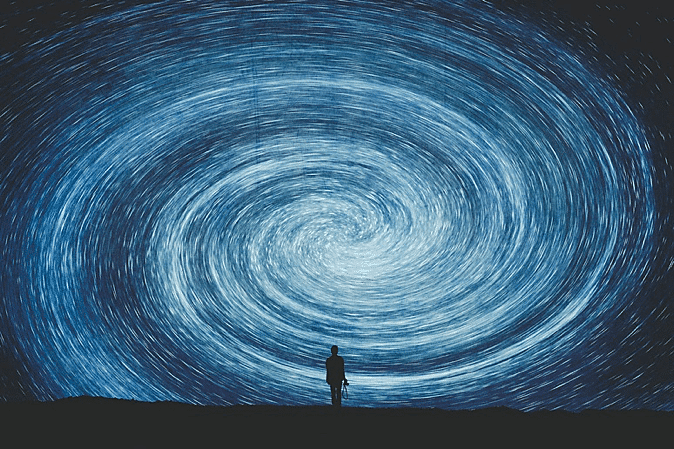 The inner ring of the vortex: #

1) Individual: Individual has a simple algorithm
2) Composition: individuals depend on communication, implement composition, and use subscribe mode.

The outer ring of vortex: #

3) Circulation leads to emergent intelligence: a large number of individuals produce probability inequality, and the state can be maintained due to self-circulation.

Using the mindset of clock system to solve complex system problems might be the root for human social issues.

Satoshi stood from the perspective of swarm system and thought about these issues. Bitcoin maybe would really become the hope for humanity.

In the next chapter we will talk about Bitcoin’s specific design.