Now let’s design a problem that requires Proof of Work to solve (POW).

Looking for the Random Number

Many times, in sleep you get the answer you would not get while awake. Satoshi was lucky to have experienced that. But it was not time for him to wake up yet.

“So what kind of problem can prove the work done by the node?” asked Tauren.

“I have precisely the problem in mind: finding a random number. You know, like guessing someone’s birthday, as long as you keep guessing, you can eventually guess it right with some effort,” Little Boy gave out his idea.
Tauren said, “I see. The nature of the problem is logic-less random collision. Such randomness is the fairest.”

“Yes! But it’d not be birthday we’d be guessing, but a random number, a number added to the message at the end of the message. And the Hash Value is asked for such that there are many zeros at the start of the value,” Little Boy continued to finish his thought.

“And we can make it five zeros at the start of the value. Anyone who wants the ledger-writing task must find this lucky number such that the Hash Value of ‘block message plus the random number’ starts with five zeros.”

After a pause, Little boy thought that the Tauren might not have understood him, so he started the actual demonstration:

Because the block message is longer, we use a short message instead: happy go lucky, and its Hash Value is:

We can see that usually the Hash does not start with 0.

The following task would be to find a lucky number such that the first five characters in the Hash are all 0.

Because this Hash Value does not start with five zeros, it is not the answer.

Then we continue to try different numbers following such formular:

Finally, in the 523th try, we find a prefix with a hash value of two consecutive 0’s. Keep looking…


After a long, long time, we finally found it!

We see that this Hash starts with five zeros, so 832290344 is the lucky number we’re looking for. Note that this is after more than 800 million guesses. We know that Hash values can’t be derived backwards, so they can only be randomly produced, and these 800 million random tries are proof of the work that I have done.

The node that got that right gets the ledger-writing task and broadcasts the message to other nodes. Tauren receives it and calculates its Hash. He got five zeros.

Since Tauren can then determine that Little Boy has done the necessary work, the transactions in the block that he produced can also be trusted with a reasonable level of validity. Then Tauren synchronized the update to his ledger while broadcasting it to other nodes.

Other nodes do the same until ledger is synchronized across the network and the block becomes the latest page in the ledger.

Now we take a look at how to add the Proof of Work mechanism into the block structure.

We can put the random number in the Header of the block and add another text in the Header as computing difficulty, a difficulty of five being a Hash Value that begins with five zeros for example. The difficulty changes based on the most recent 2016 blocks in order to keep the difficulty at around ten minutes (see graph below).

Block structure after the addition of random number and difficulty

Tauren said, “I discovered a problem: for every search for random number, while running the Hash function, the block data are read into the memory and sent over to the Hash function for computing, right?”

“How much memory do you have?” Tauren asked.

“512MB is what I have for now,” Little Boy answered back. “Okay, I see what you are saying. As the network scales, the number of transactions increases too, which means the block size only gets bigger. When the block size supersedes the memory limit, the Hash function could not run.”

“Exactly,” echoed Tauren. “My memory is even smaller. Going like this, we’d be competing over the size of our server’s memory.”

“That sounds about right. It’d be not just who does more work, but who’s fatter. We need a solution,” Little Boy said.

“I have an improvement plan, and although it doesn’t solve the memory problem completely, but the burden for the system could be greatly alleviated,” said Tauren.

Overall, Tauren’s plan is to break the random number into two parts:

The first part needs to only be run once, while the second part needs to be run several times, which would still restrict the memory issue to one part and hence reduce the network’s throughput burden. As the operation system possesses virtual memory capabilities, disk space could act as memory virtually. Although the processing speed would be slow, as the part one only runs once, it is still acceptable (see graph below). 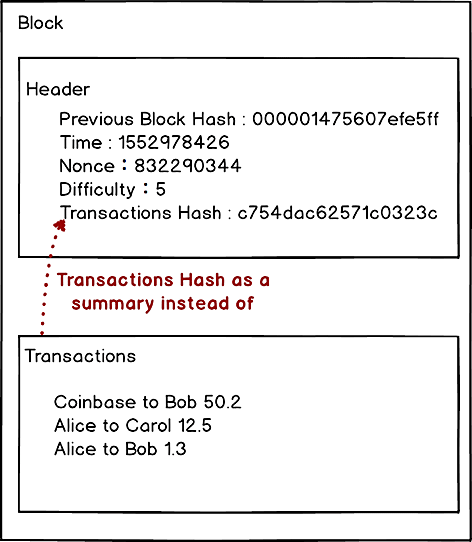 The Transactions script added to the Header

Block Header Chain essentially solves the scalability issue that as the system scales, Transactions become larger, but Header stays the same, never exceeding 1KB, even if Transactions get above 2TB. The benefit is that for some nodes, even if certain Transactions data are shortened, as long as the Header is whole, block data can still be verified.

In other words, the cost of maintaining Bitcoin’s integrity is very low (see graph below).

Next, we focus on the memory crisis of the first part.

Since we can’t eat an elephant in one single bite, we have to buy space with time. like ants finish up a large chunk of food, we do it piece by piece, many, many times. combination of Hash values together.

For example, we assume that the current Transactions include: TxA, TxB, TxC, TxD.

Note: More important content is left (about half of the full text). #

Next chapter ：Recreating Bitcoin 20:The Reorganization and Division of
Forking

Epilogue # Satoshi and Gilfoyle clarified Bitcoin’s goal. That is, a swarm system. So how could a computer system evolve from a clock system into a complex system? A Swarm System Cannot be Designed # In the café, Gilfoyle was drinking... Continue →