Since our fundamental purpose is not to prevent others from seeing the message in the transaction data, but to use the encrypted message to prove “I am I,” then my requirement is to encrypt as little text as possible. That is, the name of the sender of the encrypted message.

The inspiration originates from the real life. John wanted to buy a tractor, but he didn’t have enough money. So he needed to borrow $10,000 from Paul. Paul wanted an IOU from John, but John didn’t want to do that. In fact, John didn’t know how to write. Instead, Paul just wrote one for him: John owes Paul $10,000. But the note didn’t have any legal binding, because John could claim that Paul just made it up himself. To make the IOU a legal-binding note, John needed to sign his name on it at least to make the note unique. He signed it with his name and acknowledged the legal effects of the note. If he signed it with something other than his name, the note wouldn’t have been effective as, for all we know, only John’s name signed by himself had the uniqueness to produce the legal-binding effect (see graph below). 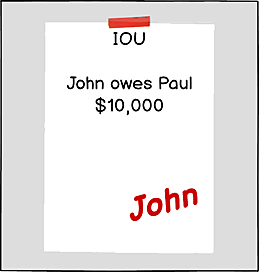 In real life the name on the IOU is signature, the least amount of text that proves “I am I.”

Based on the above inspiration, in the Bitcoin system, Alice could use his private key to encrypt his name as unique proof. The name after encryption is “digital signature.” (see graph below) 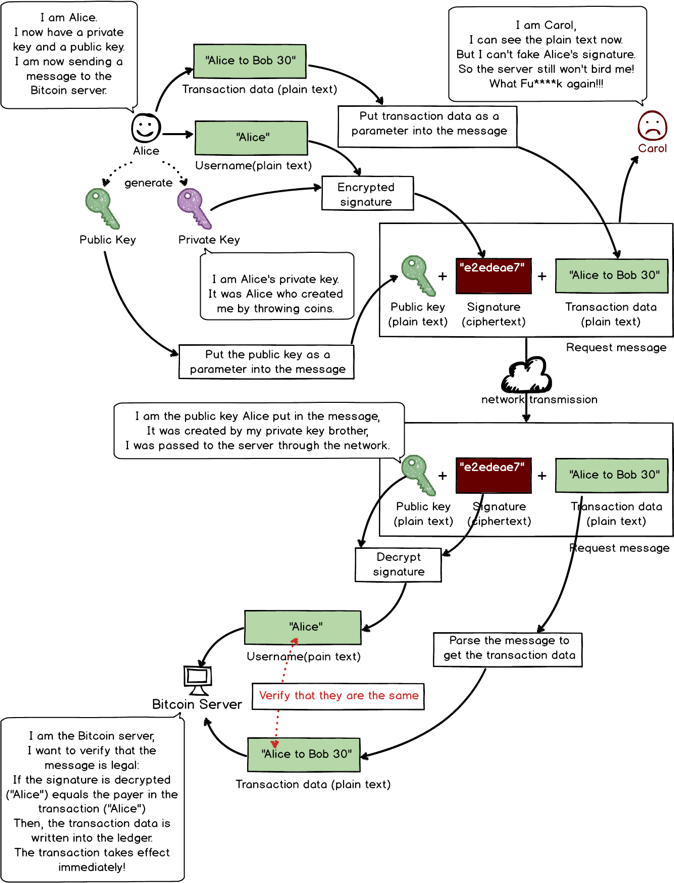 Use digital signature to prove Alice is Alice

Flaw in the Digital Signature #

Satoshi simulated running the system from the start and discovered a flaw.

This flaw came from the fact that the server didn’t store the corresponding relation between the username and the public key - it wouldn’t be able to know what the public key of Alice was. If someone used their public key to sign someone else’s name, legally speaking it would mean that John signed Sam’s name on the IOU. But currently the system lacked the ability verify.

2.Carol uses his private key to encrypt Alice’s username to get a fake signature: 806535be3e.

6.Server will verify if this “Alice” signature was actually encrypted by the real Alice.

7.After the verification is complete, the transaction gets written in the ledger and becomes effective. Carol successfully completed the fake transaction and receives 40 Bitcoin. 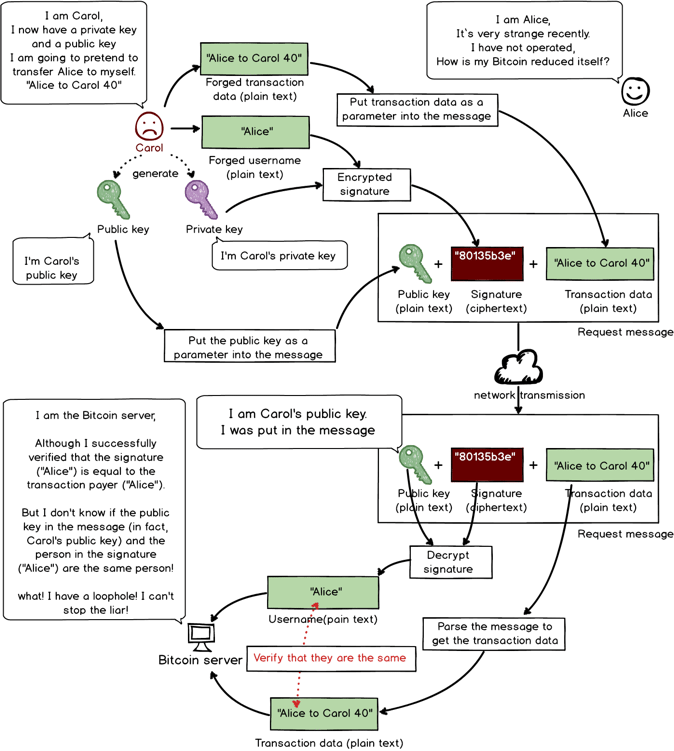 Flaw in using username as signature

What’s the source of this flaw?

How to circumvent this problem?

If we let the server store the relation between usernames and public keys, we’re going back to the old account model.

Satoshi suddenly got an inspiration: the fundamental solution is to get rid of the username and to replace it with the public key!

Same example: if Carol wants to fake a transaction from Alice to herself.

2.Carol uses her private key to encrypted Alice’s public key and gets a fake signature: f9293ued3.

6.Server starts to verify if the Public Key C in the message and the decrypted Public Key A match. If there’s no match, the transaction is denied.

This method solved the flaw by replacing the username with public key (see graph below).

Adding Signature to the Transaction Model #

“This is perfectly reasonable! It’s very necessary to add the signature part into the transaction data since every transaction’s signature and the data should be stored together just like the text and the signature in an IOU. If separated, they don’t constitute legal binding,” said Gilfoyle (see graph below). 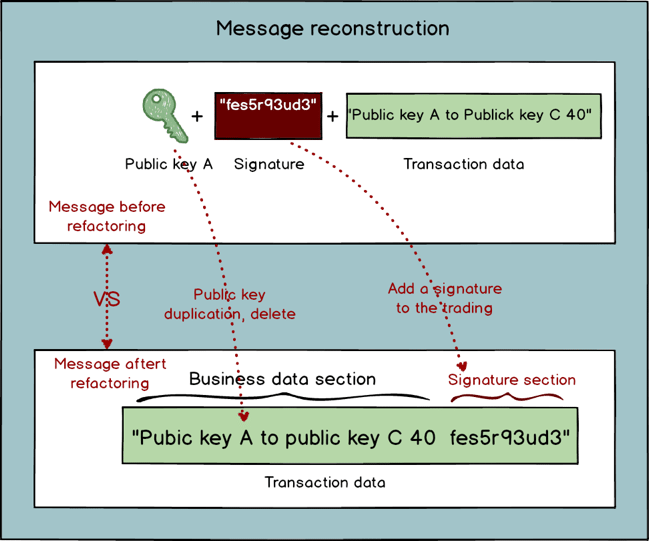 After the change it looks like this (see graph below): 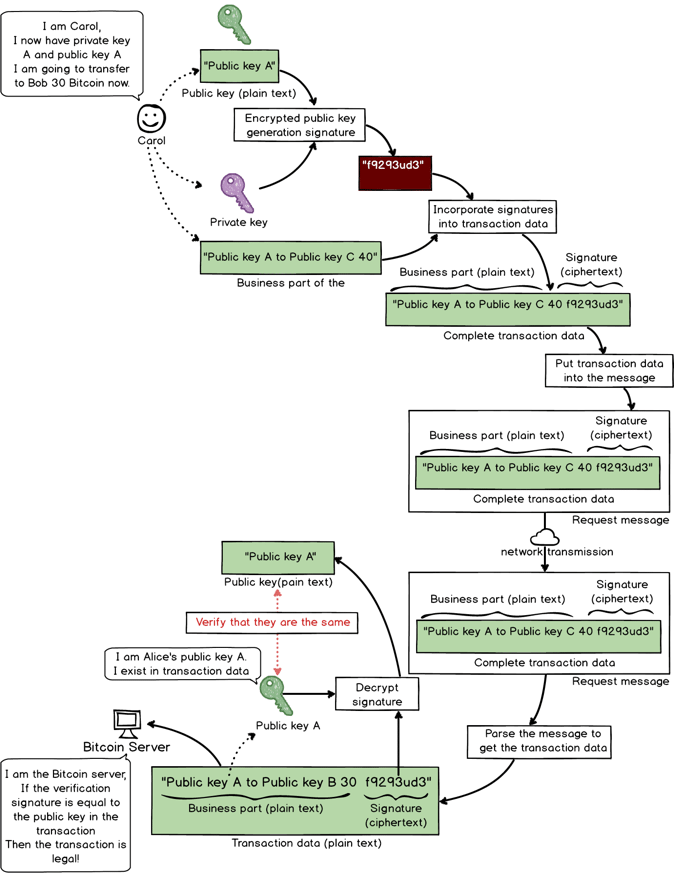 “Now username has absolutely no use. And since the public key can replace username, user.txt doesn’t need to be there either. Now we can completely be done with the account model,” Satoshi finally solved the problem of user registration.

Gilfoyle added, “the public key can be seen as the recipient address, not just a username, although essentially they are the same thing.”

“That’s a good way to understand it. Just like when I order a newspaper, I don’t have to tell the messenger my real name, just my address. The idea of public key as address fits better with everyday experience.”

“I’m ready to code. Updating it to the new model without the account part,” Satoshi took out his computer and started to code.

“May I help?” Gilfoyle said slowly.

“Absolutely! You go ahead with the data part and I will take care of the program part. I’ll give you the password of the server,” Satoshi said.
Gilfoyle got into the server and started change the data model.

Then usernames were changed into public keys in transaction.txt.
Lastly signature was added to the transaction model (see graph below). 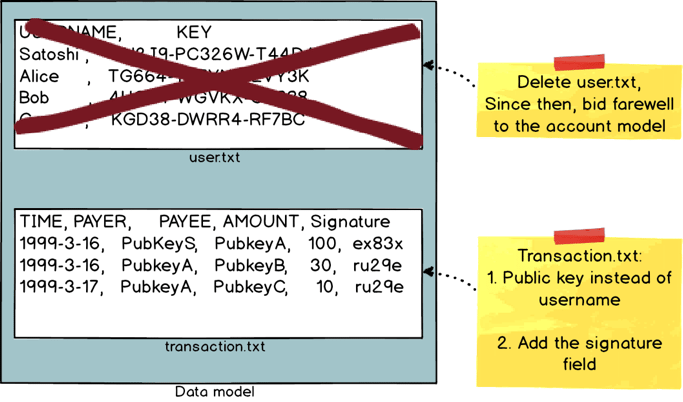 Changes to the data model

The Bitcoin system in the story has introduced digital signature and given up the account model.

However, the new design has a flaw. Since the signature remains the same, it runs the risk of being used repeatedly. For example, Alice sent Carol 50 Bitcoin. Then Carol could have the motivation to intercept and repeat this request to the server and mislead the server to pay her more than once until Alice’s balance gets below 50.

This flaw will be addressed later.

Recreating Bitcoin 1:Start over with a Simple Web Transaction System