Satoshi found inspirations on Bitcoin from evolutionary processes in nature. Next step would be implementing these inspirations.

The evolution of an organism starts with single-cellular ones to multicellular ones, and then organs emerge, ending with the formation of the brain.

Satoshi started designing the basis of Bitcoin’s existence (the inner circle of the vortex model) — that is, the peer-to-peer accounting network.

Anyway, back to where we are: implementation of the accounting network.

“The server Bitcoin has right now is one single node,” Satoshi said.

“Not exactly,” Satoshi said. “It is fundamentally different from single-cell organisms. Single-cell organisms live among their own kind, just like when we were talking about those bioluminescent bacteria. Right now, Bitcoin is just one single cell, but one single cell cannot really survive in the natural world. At the moment, we are its source of maintenance and electricity. Independently, its survival cannot continue. So, it doesn’t really count as an autonomous system. What we need to do now is to upgrade it into an autonomous swarm system that can live on itself and self-evolve.”

“We start from the simplest scenario: we add one more node to the Bitcoin network, so it becomes a dual-node swarm system.”

“I can get us a new server from home then,” said Gilfoyle.

“Excellent! That’d save us from buying a new one,” Satoshi said.
After a while, Gilfoyle put an old computer on the coffee table, and now they have two servers.

Installing the previous Bitcoin server code would be ineffective at this point, as the two servers would think that they were the sole server in the network and make communications impossible.

“First, we need to connect the two servers for them to be aware of each other’s existence,” said Satoshi.

“Then we need them to communicate with each other and sync the ledger between themselves,” added Gilfoyle.

“Yes,” said Satoshi. “There will be many more problems coming. We will solve them as we go.”

“How can the two nodes connect to each other like two neurons?” Gilfoyle posed the question. 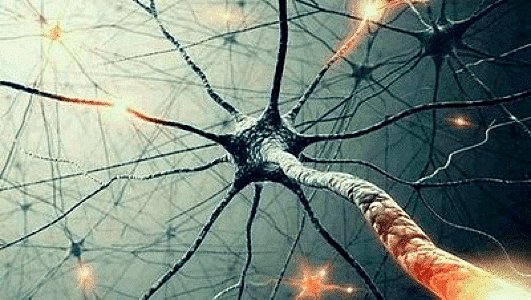 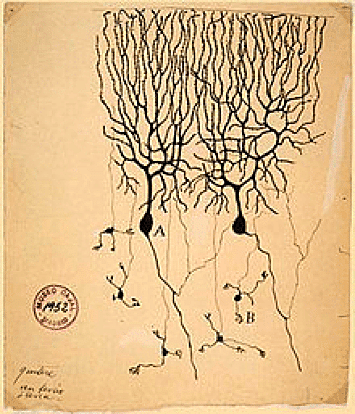 First of all, let’s take a look at how neurons connect to each other. Each neuron has dendrites and axons. The role of dendrites is to receive signals from other neurons, and the role of axons is to transmit signals (see graph below). 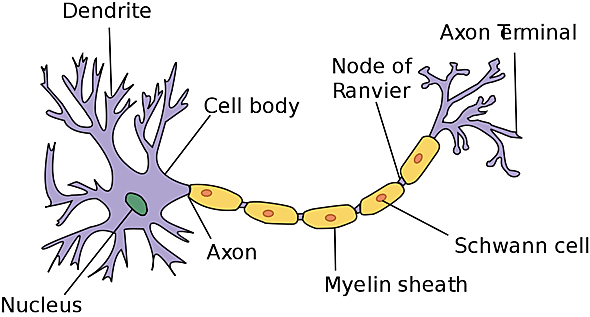 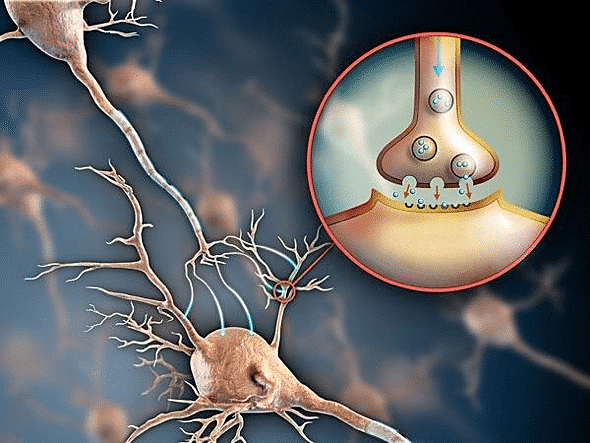 Information passes through dendrites and axons freely through neural transmitters

“We can use the TCP/IP protocol to achieve the same capabilities,” Satoshi said.

IP is equivalent to the coordinates of the neuron.

Socket Server is equivalent to the axon that sends messages.

Socket Client is equivalent to the dendrites of the neuron that receives messages.

One node needs independent IP and needs to at least create a Socket Server and a Socket Client.

A Socket Client can proactively connect to a Socket Server of its corresponding IP address, like a dendrite connecting to the axon of another neuron.

One Socket Server can be connected to multiple Socket Clients, like an axon connected to a group of dendrites.

Once Socket Client and Socket Server connects successfully, the information channel is established so that messages can transmit between two nodes bi-directionally, just like how two neurons continuously pass information to each other both ways.

Satoshi modified the code based on the above logic and deployed it on both servers. Now a very simple P2P network was complete (see graph below).

Of course, there was a lot of redundancy in the code, but it could be dealt with later. Now there were only two nodes running the network.

The network may still appear insufficient to demonstrate the complexity of a P2P network. We will add in one more node for illustrative purposes (see graph below). 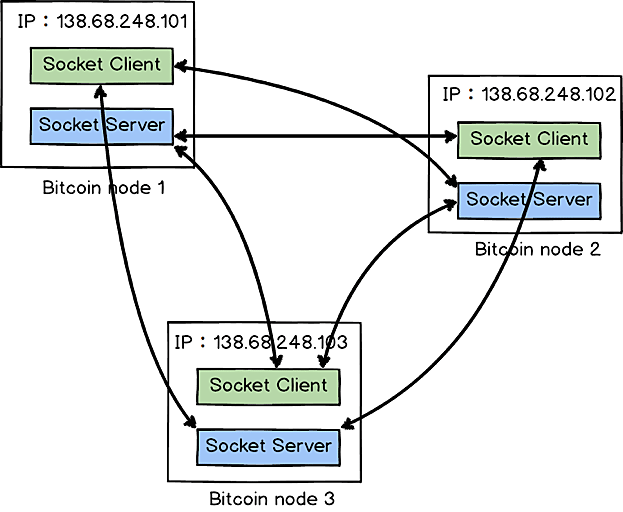 “Complexity will grow exponentially as the number of nodes increases in future,” Satoshi pointed out.

With the server adapted for a P2P network, the client needed to be adapted as well, as the previous web architecture had the problem of a single point of failure as in the website bitcoin.org (see graph below: under the web architecture the Node 2 could never be accessed.) 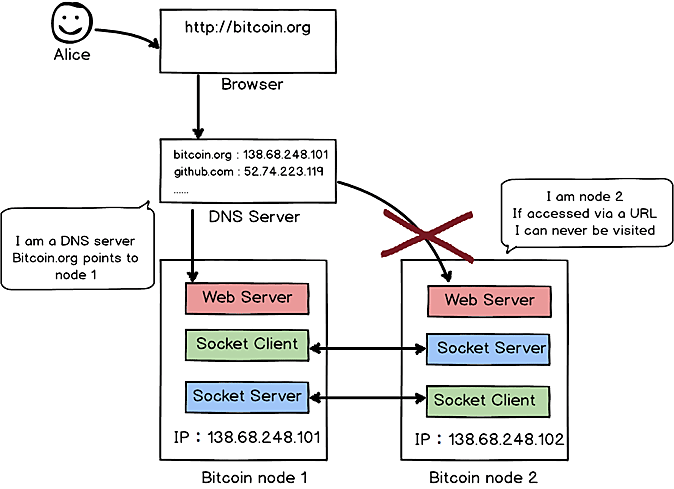 Node 2 will never be accessed under the web architecture

“We can tell if a system is a swarm system by checking whether or not there is a single point of failure,” Satoshi said. “Traditionally, although the swarm system has been claimed to be a distributed system, the distribution is not truly decentralized, because there would always be one node for load balancing or service discovery that is responsible for allocating access paths in the architecture.” (see graph below) 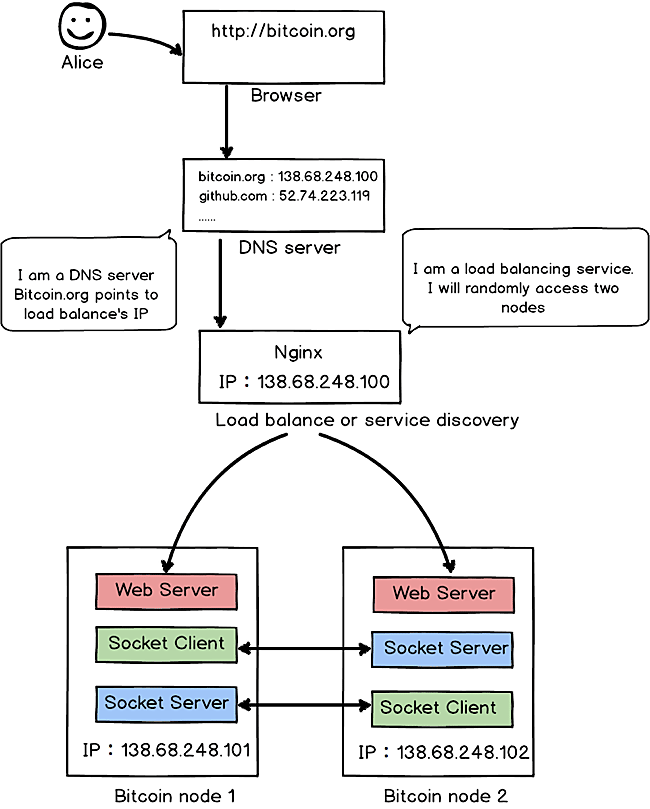 To avoid the single point problem, Bitcoin client needs to get rid of the web browser to become a node that directly connects to a ledger node in the network. This client node is the light node we mentioned in the previous chapter, as it does not contain the whole of the ledger history. And because light nodes need to rely on their own lightweight storage to achieve independent transaction simple verification (simple verification requires the concept of MERKLE TREE, which will be discussed in subsequent chapters), So there is a technical term for it: Simplified Payment Verification (SPV for short).

Client changed from browser to a SPV, which meant that a user needed to install an independent app on its device. This also meant that the engineering of Bitcoin now had evolved into two parts: the full node and the SPV.

Satoshi finished coding the SPV and completed its app. He published online for user download. 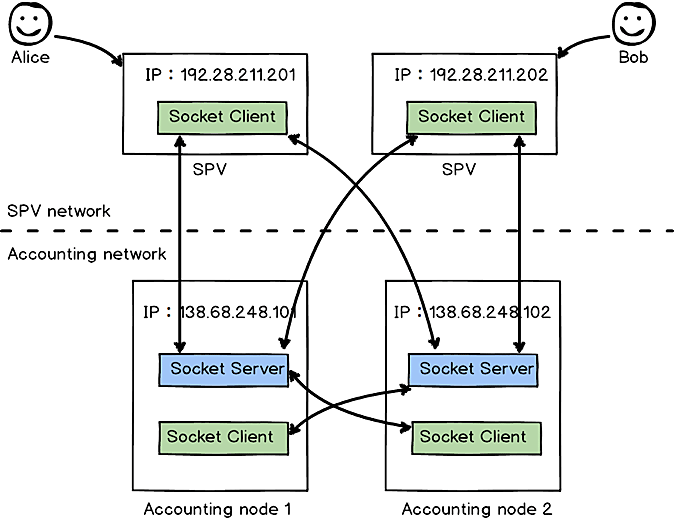 At this point, as long as there is one full node in operation, killing every single other full node would still leave the system working properly for users.

How to achieve ledger synchronization between nodes? That’s the next question for Satoshi and Gilfoyle.

In addition, connections between SPVs would evolve into P2P connections in the future, and the functionalities of SPV would extend beyond mere transactions, It is precisely because the SPV has the mutability space of its own algorithm that Bitcoin can evolve into a super-intelligence on its own, just as the evolution of life is based on individual genetic variations. (in graph below) 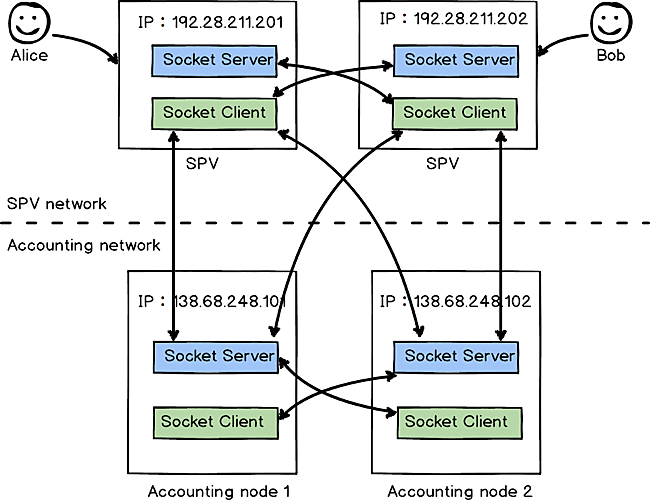 Of course, this is way ahead of the game, and we’re just focusing on the survival of Bitcoin: the construction of the accounting network.

In the next book we will discuss SPV and SPV network, where Alice and Bob can transfer money point-to-point, without being mediated through the accounting network

We will discuss how to synchronize the ledgers of full nodes in the next chapter.

Epilogue # Now let’s design a problem that requires Proof of Work to solve (POW). Looking for the Random Number Many times, in sleep you get the answer you would not get while awake. Satoshi was lucky to have experienced that. But it was... Continue →